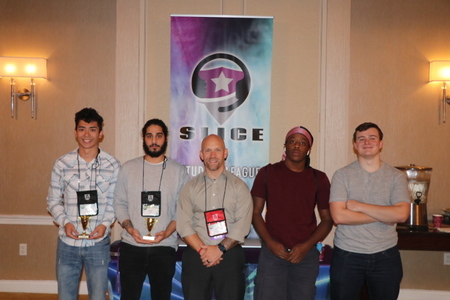 The Elmira College eSports Team has claimed their first champion title after competing in a recent eSports event hosted by the Student League for Intercollegiate Esports (SLICE) and the Association for the Promotion of Campus Activities (APCA). This is the first event of its kind to be hosted by these organizations.

Teams from nine colleges and universities attended the tournament held at the Teaneck Marriott at Glenpointe in Teaneck, New Jersey, on October 5. Smash Brothers, Rocket League, and Fortnite were among the competitive games played.

"Evan and Keion are both excellent assets to the team and I am thrilled with their performance," said Jonathan Muller '18, EC eSports coach. "I look forward to how well both men, and the rest of the team, will do in the future."

SLICE will hold two more regional competitions this fall in Houston, Texas on October 10-13 and in Chicago, Illinois on November 8-10. Regional participants will be invited to participate in the national competition in Orlando, Florida on March 5-8, 2020.